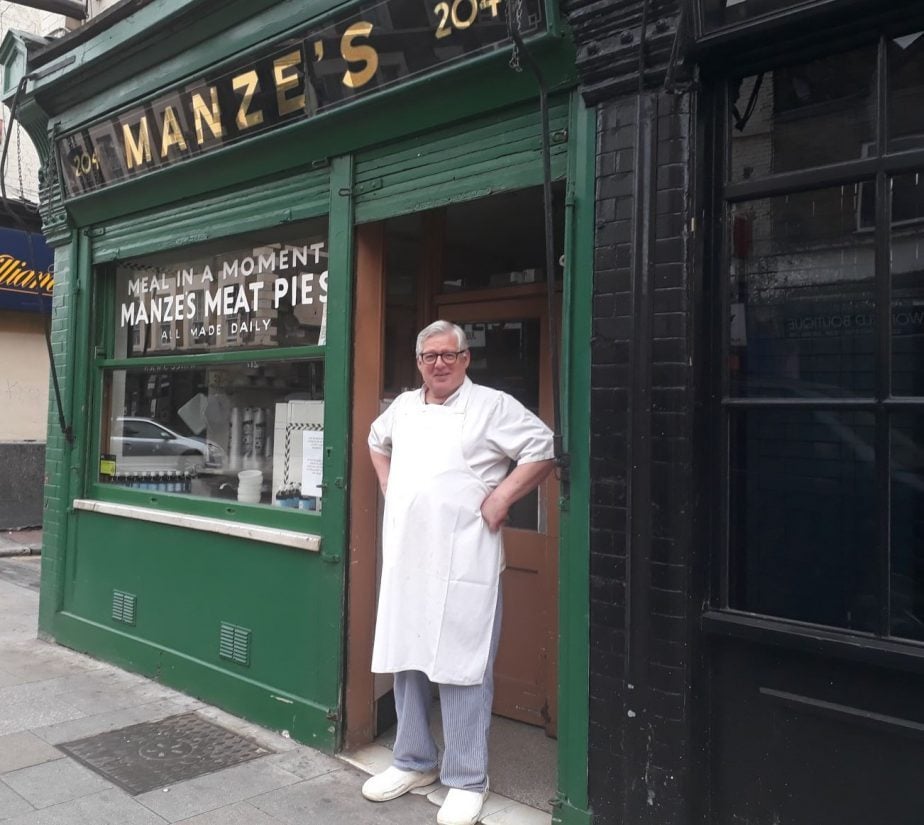 BBC3’s darkly comic six-part series, Back to Life, follows Miri (Daisy Haggard), attempting to navigate life outside of prison after serving a long sentence for a terrible crime.

FilmFixer manages the film office service for 14 London boroughs including, Bromley, Lewisham and Lambeth where scenes for the series were filmed last winter.

A key location, Nathan’s fish and chip shop in episode 2, was filmed in Manze’s Pie & Mash Shop on Deptford High Street in Lewisham, where Miri gets her first job after leaving prison.

The production filmed inside and outside the traditional pie shop for two days. The owner, George Manze (pictured above), found the whole experience of working with Two Brothers production team and Lewisham Film Office really enjoyable.

He was particularly impressed by the lengths the friendly crew went to reinstate the premises after they dressed the interior to resemble a fish and chip shop in Hythe.

Location Manager, Zoe Thomas said: “Working with George was a delight and made the shoot very easy.  He would definitely like to host another shoot in future.”

Zoe was also very grateful to Lewisham Film Office “for their friendly, professional support enabling the efficient and smooth running of the shoot.”

Location Manager for Back to Life, Bill Twiston Davies, said: “We shot at Bromley Town Hall for a week or so. It’s such a handsome and versatile building. The place is huge and so gave us so many options for what we required. We dressed in multiple sets (a school, a prison, a doctor’s surgery, a police station) all of which looked great on camera. The film officers for Bromley were brilliant and I will always be grateful to them for their hard work on our behalf.”

Bromley Town Hall is no longer available for filming. Bromley Film Office is always happy to help source locations and facilitate filming in the borough.

Locations in Lambeth were also used including houses in Ryecroft Road,  Greenhurst Road and Braxted Park.  Another scene was filmed at West Norwood Cemetery.   Parking for the production was accommodated within Streatham Common and they made a generous donation to The Friends of Streatham Common as a thank you.

This website uses cookies to improve your experience while you navigate through the website. Out of these, the cookies that are categorized as necessary are stored on your browser as they are essential for the working of basic functionalities of the website. We also use third-party cookies that help us analyze and understand how you use this website. These cookies will be stored in your browser only with your consent. You also have the option to opt-out of these cookies. But opting out of some of these cookies may affect your browsing experience.
Necessary Always Enabled

Any cookies that may not be particularly necessary for the website to function and is used specifically to collect user personal data via analytics, ads, other embedded contents are termed as non-necessary cookies. It is mandatory to procure user consent prior to running these cookies on your website.